How To Catch Flathead in The Swan River

How To Catch Flathead in The Swan River

There is nothing better than cruising along the banks of the swan river casually flicking lures for the humble swan river flathead.   Come October it’s flatty season.  The Northern Bar Tailed Flathead set up camp some time ago in the Swan River and boy are Perth fishos glad they did. Feisty fighters, ambush predators that will take most lures and are great on the table. There is much to love about the old flathead. If you’ve never targeted flathead in the swan river this post outlines exactly what you need to do to catch this west oz fishing icon.

Recent years have seen a prevalence of micro-algae that has clogged up some of the best flathead spots. Despite that you can still get flathead in good numbers. You just need the right type of lures and to find the weed free spots. From memory this weed wasn’t as much of a problem 5 to 10 years ago.  It could be caused by increased nutrients making their way into the system from suburban fertiliser. But it could be any number of causes, including a natural part of the system. In any case it’s there and you have to fish around it.

Swan river flathead are found throughout the Swan and Canning River system. In the upper reaches of the Swan they can often be a bycatch in the bream spots around snags. Generally they are targeted in the flats down river though.

Look for drop offs, flats, drains and structure. Really flathead are everywhere in the river.

As far as techniques go you want the lure as close the bottom as possible without snagging up. Most areas you target for flatties are pretty sandy. You want the jig literally hitting the bottom and kicking some sand up to attract attention. Flathead are ambush predators you want to cover some ground, but slowly. Generally you want to move slowly along the bank, make a cast in a spot, then take one of two paces and cast again.  Don’t give up too quickly on the retrieve, keep working the lure right to your feet. You’ll be surprised the amount of times you’ll hook a flattie literally right at your feet in the shoreline.

Tides, Times and Areas for Flathead.

Swan river flathead can be caught at any time of day. But a balmy summer afternoon seems the ideal conditions. As far as tides go they can be caught at any tide. But if you find a drain you want to fish that at low tide. Basically a drain is an area of deep water by the shore between a sand bank further offshore. These areas trap bait fish at low tide as the water drains out, this is perfect for old mister flatty as he waits in ambush. Flathead fishing is a great anytime fishing activity. If it’s low tide try wading out on the flats and fishing to the drop offs. As the tide fills in hang around on shore and fish the flats. Persistence is the key. When you do hook a fish hang around that area, often they will be holed up together.

Example of a “drain” in the swan river. The perfect place to target flathead at low tide.

Due to blowies lures are really your only option. Unless your fishing the dead of night when blowies are less active. Lures are the way to go though, it’s just so much fun! Flathead are ferocious predators and strike hard. The fight isn’t spectacular. The smaller ones are pretty lively. The big one’s come in lazy, a big flatty will feel like a snag or lump of weed at first. Then come to life as they get close to shore.

As far as gear goes you want a nice light rod with a good action for casting a long way. Around 2 to 4 kg is perfect. Match that with a 2000 spin reel with 4-8 pound braid and 8 pound fluorocarbon leader and you’re good to go.

It’s no secret that flathead love soft plastics. There is a myriad of combinations that work, but over the years a few favourites have come to mind. You can’t go past the Z Man Extra Tough Grubz. These lures are super stretchy and resist the blowies as well as any soft plastic.  Some favourite colours include pumpkin and watermelon.  Pair these with a TT 1/8 to 1/16 tournament edition jig heads,  depending on the current and depth your fishing. Don’t be afraid to mix it up though. Really any soft plastic will work. Don’t be afraid to try a bigger lure to. Flatties have a huge mouth and the big ones love a big lure.

Flatties will take hard bodies. Just look for a smallish dive lure. Again most will work. They’ll even go a Halco Twisty on a slow retrieve (great for mixing it up when you’re targeting tailor in the evening).  Favourites include the 35MM RMG Scorpion and the ECO Gear SX 40.

There you go. With summer just around the corner now is the perfect time to start targeting Flathead in the Swan River. The best thing about Flathead season is you can pretty much go anytime. So bring on summer! 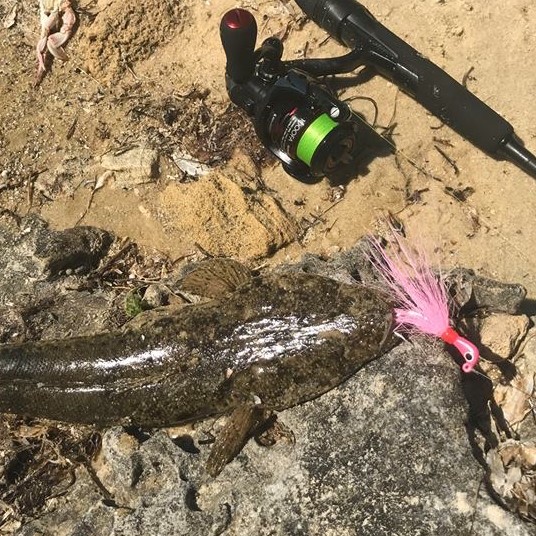 The Latest Catch
From the Depths
Get Social – Share This