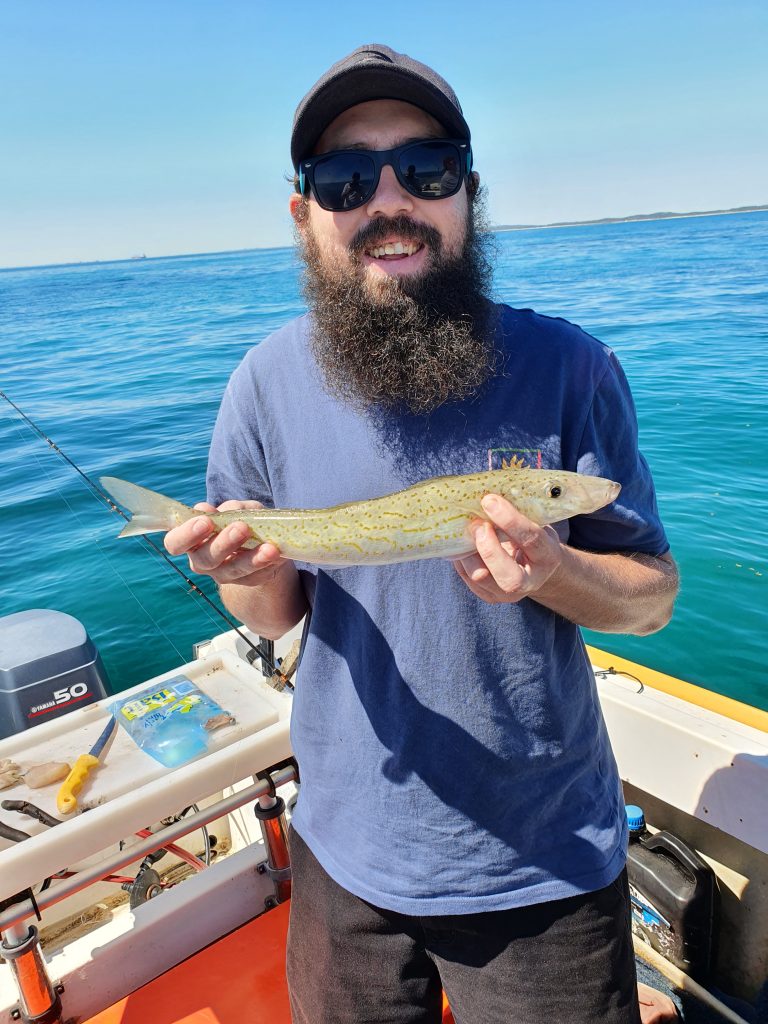 Ahh King George Whiting, spotted whiting or kidney slappers, whatever you call them they’re a special fish. King George Whiting can sometimes be easy to catch, especially in the right areas. However in the shallower water off Perth and Fremantle where most of us mainly fish they can be elusive.  Many times I’ve caught a bag in one spot and returned the next day to find they’ve all gone!

Where to Catch King George Whiting

In Perth King George whiting in mostly a boat affair. Occasionally caught from shore at places such as The North Mole or Henderson Cliffs, a boat is required to get to the weed patches where they live. A big boat is not necessary however. Smaller models of KG’s love the sheltered waters of Cockburn and Warnbro Sound.

In water up to 8 metres likely King Goerge ground is easy to find because in clear conditions you can see the bottom. Look for areas of so-called “broken ground”. Broken ground are patches of weed, sand and reef. These areas are found adjacent to major weed bank s.  Look for big round holes of sand in weedy or reefy area. 5 to 6 metres seems to be ideal.

Once deeper in around 20 metres finding King George ground is a harder proposition, but once found the rewards can be an abundance of good sized fish with little by-catch.  Look for areas of small rises of reef or rock on your sounder of around 1 to 2 metres.

How to Catch King George Whiting

Once you find a likely spot drift over the ground as a start. Often you’ll get a by-catch of undesirables such as butterfish as you hone in to where the KGs are. Unfortunately this is just part of the process for KG hunting.  Once you hook one mark that spot on your sounder and drift over again.

The key to anchoring for King George is knowing that fish live there and using burley. After a couple of successful drifts you’ll often find the fish are holed up in one area. A good strategy is to anchor on this spot and burley to keep them interested. When you get this right it can be a deadly strategy resulting in fish every drop. With your burley use a weighted burley pot that drops all the way to the bottom. Use a combination of pellets and mashed up mulies for burley. If the fish aren’t on the bite after anchoring cast around the boat at the sand holes.

All though they can be caught on soft plastics bait rigs seem to be the most effective. Run a paternoster rig with smallish hooks or a running sinker rig. When anchored you can have a parternoster on the bottom under the boat and your running sinker rig casted behind the boat. It’s nice to add a bit of flash and color your rigs to, red beads are dynamite.  Cast frequently into different areas around the boat. If you don’t hook up within 1 to 2 minutes move your boat to another likely looking spot.

There are quite a few popular whiting rigs on the market to. A favourite is the  black magic whiting snatcher. Honesty these work. I’ve tested these against my own homemade paternoster with a fluoro red bean instead of the flashers these have and the Black Magic’s always catch more fish. Another cheaper option Surecatch Whiting rigs, at that price it’s always handy to have a few of these to save tying rigs in the boat.

Like most whiting King George will take any bait. I’ve had most success on fresh squid tentacles. But I’ve caught them on mulies, octopus, prawn and packet squid to.

The Latest Catch
From the Depths
Get Social – Share This